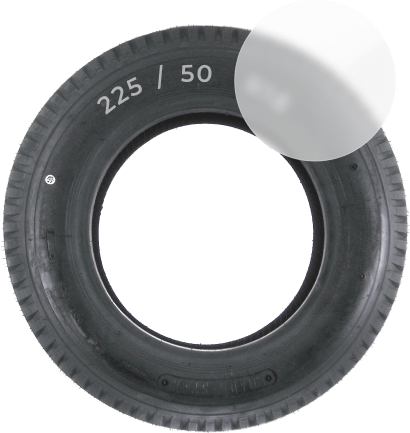 Rugged terrain tires appeared on the market as a combination of all-terrain and mud tires, offering the best of both worlds. They allow you to explore even the most extreme off-road conditions, while also having a comfortable ride when driving on the streets. On this page, we’ll discover more about them and also offer you a choice of some of the best used rugged terrain tires.

What kind of vehicle does rugged terrain need?

Rugged terrain is an area of land that is not even and is covered with rocks, trees and plants. It’s basically the perfect place for an off-road enthusiast to have fun on his SUV.

Most SUV manufacturers are factory equipping their cars with all-terrain tires, knowing that the big majority of drivers will drive only on paved roads. But if you want to seriously “abuse” your SUV and go in more difficult off-road conditions while not sacrificing comfort on the roads, then you definitely need rugged terrain tires.

What are rugged terrain tires?

Manufacturers have adapted to the needs of their consumers that want to be able to drive comfortably and efficiently on roads and highways, while also being capable of occasionally exploring difficult terrains with a great overall performance. This category is basically a combination of all-terrain tires and mud tires, and they are also referred to as “hybrid terrain tires”.

The construction of new or used rugged terrain tires has staggered tread blocks and a high void ratio, and all of these features allow them to perform much better off-road compared to all-terrain tires. They even drive well in deep mud, on rocky terrains and in other extreme conditions.

Mud terrain tires can have similar performance, but they have many drawbacks on paved roads and highways. But that’s not the case of rugged terrain tires. They have an optimized tread block and sipping patterns that are allowing the tire to perform well on-road, to have a good grip on both wet and dry roads, while also not making too much noise or giving a high fuel consumption. They are basically all-rounders, being able to perform well in most terrain and weather conditions.

The most common and popular rugged tires are made by BFGoodrich, and their most demanded model is the BFGoodrich Rugged Trail. In our online store you can currently find it as new, used and driven once, and it is available in multiple sizes and with a tread left ranging between 6/32” and 15/32”.

As the name suggests, all-terrain tires are designed to work on a wide variety of surfaces and they are suited for drivers that go for about half the time on roads and highways, and half the time off-road. They have large and staggered tread blocks and a medium-wide void ratio which allows them to perform well off-road, while also not sacrificing comfort and performance on the streets. But they are definitely not suited for deep mud and more difficult terrains.

So then the manufacturers created the mud tires, which have similar large and staggered tread blocks but with a much wider void area between them. This allows the tires to conquer more difficult surfaces and to not get stuck in deep mud. These tires are used if you spend most of the time off-road, but they lack traction on concrete roads. They also increase fuel consumption and make more noise when driving on highways.

So a new demand appeared on the market, for hybrid tires that can go in extreme off-road conditions while also performing very well on the streets, and that’s how the rugged terrain tires appeared. They are basically a combination between all-terrain and mud terrain tires. They can handle rough terrains including deep mud and rocky surfaces, while not sacrificing comfort and efficiency on paved roads.

New or used rugged terrain tires have those oversized tread blocks that give great grip and traction in mud and off-road conditions, but they do not perform so well on snow. The snow gets compacted and fills out the channels between the blocks, so the tires will be much less effective.

The soft rubber they are made of works great in warm weather and is allowing the SUV to run great on rocks, holes, and rough terrains, but once the temperature drops, the material becomes very hard.

In case you need to drive on ice or snow, you either have to change to winter tires or find rugged terrain tires with the “three-peak mountain snowflake” symbol on them. This symbol shows that they can perform well on ice and snow.

You can find used rugged terrain tires in retail stores, local shops or online marketplaces, but the easiest way — an online store specializing in selling used rugged terrain tires, such as Utires.com. We have a wide variety of used tires to choose from, and you can filter them by size, price, section, aspect, rim, condition and tread depth. Our tires are carefully selected and inspected, so you can be sure that your drive would be pleasant and safe. Plus, free shipping with every order: your set of tires will arrive right at your doorstep!

What is the best price to pay for used rugged terrain tires?

The price would depend on the brand, the model, the condition of the tire, and the tread left. The average price on our website is $145, for a used rugged terrain tire with 12/32” tread left.

Is it worth it to buy used rugged terrain tires?

Yes, it totally does. In our store, some used tires with about 80% tread left are half the price of a new tire. So it’s definitely worth it and you will end up making a great deal. Plus you will also contribute to the preservation of our planet by “saving” tires in good condition that would have otherwise been thrown away directly.

What’s the best rugged terrain tire on the market?

Utires.com customers’ all time favorite model of rugged terrain tires is the BFGoodrich Rugged Trail. They’ve chosen it so many times, that it makes us assume this might be the best model on the market.

Can I use rugged terrain tires on snow?

Technically you can, but we don’t recommend it. If you really insist on doing that, at least get tires with the “three-peak mountain snowflake” symbol on them.