Using Studded Winter Tires And What You Should Know About Them

Studded tires are tires where approximately 80 to 100 small metal studs are inserted to increase traction on the roads, particularly on icy or snowy surfaces. Although studded tires have been around since the 1890s, the use of studded tires in the United States was only introduced in the early 1960s.

Records show that the modern studded tires these days first gained popularity in Scandinavia in the 1950s. The popularity of using studded tires on the icy roads in northern Europe happened about two decades earlier before its popularity grew in the US. However, the benefit of providing more traction during winter time and the damage which studded tires cause on non-icy pavements remain as points of contentions during debates.

Its popularity in the US in the 1970s also prodded researchers to assess its safety and effects on the pavement. State governments and countries differ in their policies of allowing the use of studded winter tires. Two decades ago, Rune Elvik looked into the effects on accident of studded tires and laws banning its uses. Elvik presented his paper during the 77th Annual Meeting of the Transportation Research Board on January 11 to 15, 1998. In his study, he concluded that using studded tires only decreased the crash rate by a “quite small” rate of 1 to 10 percent.

However, most recent researches are looking into the future of innovating studded tires with retractable studs. A market study also painted a rosy forecast for the winter tire market with a projection of a growing global sales of winter tires 4.4 percent annually with a total value of $25 billion by 2021. Table 1 below shows the projected increasing demand for winter tires especially in countries with colder climates. 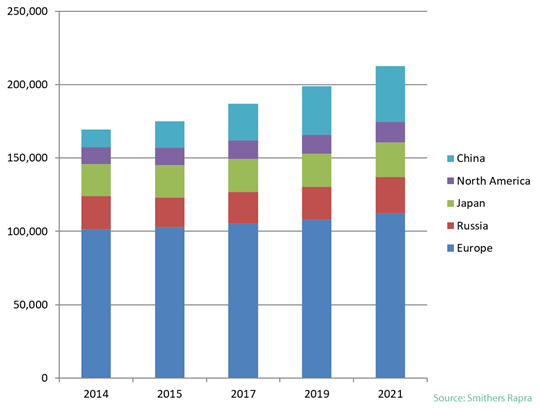 Can you put studs on any tires?

Like regular tires, studded tires wear out, too. That is why you can only put studs on new tires that have never been used. You cannot put a stud nor re-stud tires which were already driven on because it might cause serious tire damage from incorrect stud lengths or debris that were trapped under the stud.

The holes where the studs fit were molded into the tread when manufactured. If a stud is inserted incorrectly – either too shallow or too deep, it will not operate efficiently. For instance, when studs are inserted too deep, the protrusion will not reach the tread surface and will not effectively provide traction. On the other hand, when inserted too shallowly, the protrusion might wiggle and could enlarge the molded hole and be ejected.

The tire stud, when properly calibrated, could maintain its protrusion length even when studded tires wear out. When the vehicle that uses studded tires ran on the ice, the studs will dig into the ice, increasing the traction.

Studded tires are winter tires that are built to run on places where there is heavy snowfall making the road condition extremely unpredictable. The cold temperature challenges the tires’ traction capacity. Hence, winter tires were manufactured to provide tread rubber that remains flexible allowing it to get a grip of the road more efficiently.

The tread depths and patterns of winter tires are also deeper and more unique allowing the tire to reduce snow build up and get better traction over the snowy road. These types of tires also have high sipes density giving it more traction on ice.

Can I Use My Winter Tires All Year Round

Changing tires could be tiring or inconvenient. However, using winter tires all year round is not recommended since this will cost you a lot of money and will compromise your car’s performance on the road. Tire manufacturers made different types of tires for different seasons because each season, the road condition would need a special kind of vehicle to keep you safe on the road.

Winter tires tend to wear faster on a warm and dry pavement. Since the tread rubber of winter tires is made more flexible than other types of tires, warm temperatures can quickly wear them down. Unlike winter tires, summer and all-season tires are built to withstand warm weather. Using your winter tires in any season will also decrease its performance. Once it is already winter again, you may find your studded winter tires worn out.

When are Tire Studs Worn Out?

Tire studs wear out as they are driven on icy roads. The pins on studded winter tires wear a little slower than the metal casings around them retaining the stud’s efficiency to continue to run on an icy surface. But when a winter studded tire’s tread wears down to approximately 5/32”, the studs gradually lose effectiveness in running on deep snow. Studded winter tires are considered worn out when the tread depth is below six mm.

Here are some signs that will tell you when studded tires have worn out:

Where are studded tires legal?

Countries all over the world differ on their demand for winter ties A few states allow the use of studded tires without any exemptions, some of them totally prohibit its use, while several states grant exemptions based on the weather conditions and studs that have reasonable proportions. Table 2 below shows the policy of each state on the use of studded winter tires:

Table 2. Differences of Policies on the Usage of Studded Tires Among Federal States (Source: www.ustires.org)

What are the problems with studded tires?

But, when the road is not covered with ice, studded tires were found to be damaging on the road pavement as the metal studs would dig into the pavement. This is the reason why many states placed restrictions on the use of studded tires, while some states, totally banned its use.

Here are some problems that studies have identified with studded winter tires:

Do studded tires wear out?

Like regular tires, studded tires wear out, too. That is why you can only put studs on new tires that have never been used. You cannot put a stud nor re-stud tires which were already driven on because it might cause serious tire damage from incorrect stud lengths or debris that were trapped under the stud.

The Difference Between Studded And Studless Winter Tires

Government data showed that 70 percent of the US population lives in the snowy regions. The Federal Highway Administration also recorded a high rate of accidents when driving on snowy roads. According to the data, there are over 1,300 people killed and more than 118,800 are injured annually due to motor-vehicle crashes on snowy and icy roads. The same record shows that yearly, 24 percent of weather-related motor-vehicle crashes occur in snowy or icy pavements and 15 percent happen during snowfall or sleet.

Here is a table comparing the major differences between the two:

Utires.com - we are a young, but quickly growing company specializing in providing quality used tires both online and for the convenience of our local customers. Our used tires go through rigorous quality control check to make sure you get top of the line tires.

Our warehouse and shop are both located in Chicago and we ship free nationally mainland US.